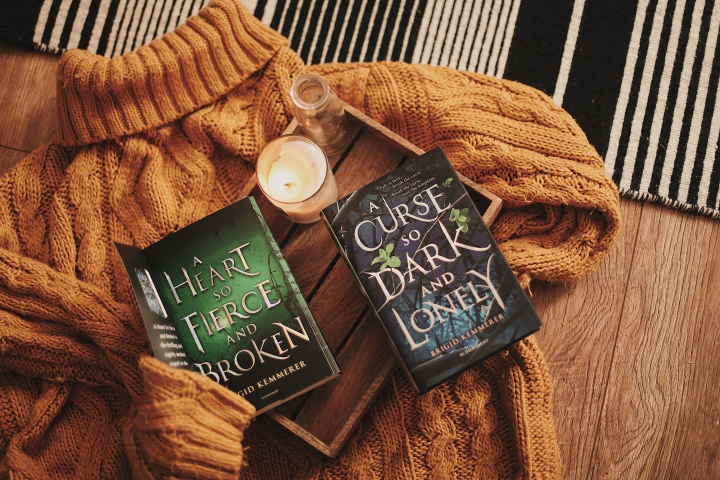 Thanks to Bloomsbury for sending me a proof copy of A Heart So Fierce and Broken!

Harper has freed Prince Rhen from the curse that almost destroyed his kingdom. But all is not well; rumours are rife that there is a rival heir with a stronger claim to the throne and that ‘Princess’ Harper of Disi is nothing but a fraud.

Grey has fled the castle carrying a terrible secret. When he is discovered by soldiers and returned to Ironrose by force, Grey’s allegiances begin to shift. And as he grows closer to an enemy princess, he is forced to decide whether he will stand against Rhen for the crown he never wanted…

(Spoilers for A Curse So Dark and Lonely ahead!)

After reading A Curse So Dark and Lonely and really enjoying it, I was so excited for the sequel – however, I didn’t expect to enjoy it more than the first book!

Although AHSFAB follows on from ACSDAL, it does follow different characters. This time we see the perspectives of Grey, everyone’s favourite guard, and Lia Mara, princess of Syhl Shallow and seen as an enemy of Emberfall and their people. I loved Rhen and Harper’s story in ACSDAL, but I have to say, I loved Grey and Lia Mara even more.

Grey is on the run, determined not to take his place as King, and Lia Mara is determined to make peace between Syhl Shallow and Emberfall – despite her mother, Queen Karis Luran, and sister Nolla Verin being on the brink of waging war. The two characters are brought together through *unexpected circumstances* and so began a journey story that I, a person who generally is not a fan of journey stories, loved. Whereas ACSDAL was, at its heart, a love story, AHSFAB features a lot more character development, political intrigue, some amazing training montages – and the romance element is still there! 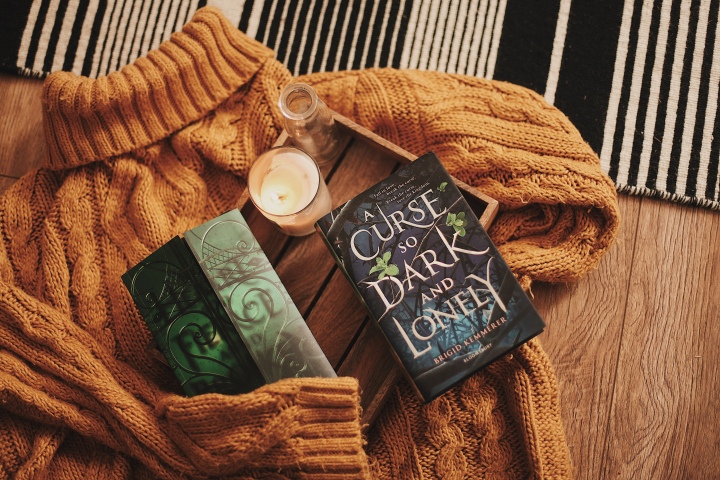 We got to see a lot more of the world in this book after the first instalment was mostly just set in one or two places, and it was interesting to see how Rhen’s curse had affected his country and people, as well as seeing more of the neighbouring countries of Emberfall. With the addition of more locations and more characters, we also saw more enemies and strife – this book was definitely darker than the first and focused more on the horrors of the possible impending war. I definitely feel like this was a bit of foreshadowing to something even darker happening in the third instalment of the series.

Not only did this book feature a favourite trope of mine (enemies to lovers) but it was written in my absolute favourite way – enemies to lovers, who when they’re enemies (or at least expected to be enemies) have a certain respect for each other and the way they act and fight. I won’t say much more but the dynamics of this relationship absolutely made the book for me!

I’m so excited to read more about Grey and Lia Mara – Lia Mara is definitely a new favourite character of mine! I’m sure I’m the sequel we’ll see them meet Rhen and Harper again and I can’t wait to see how that inevitable crash plays out.

A Heart So Fierce and Broken was definitely a build up to something even bigger, but was still on its own an amazing epic fantasy tale full of action and intrigue. I can’t wait to see what happens next!

QOTD: have you read Girls of Paper and Fire by @girlinthelens? 🔥 • I think it’s pretty obvious from my multiple editions that I’ve read (and loved) both books in this series so far! GOSAS left us with a heart wrenching cliffhanger and I cannot wait for book three. The gorgeous holographic art print of Lei and Wren by @pinktofu_art was included in @illumicrate’s January box, and it now takes centre stage on my print wall - these girls are my favourites and I hope they get a happy ending! Today’s prompt for #FFFebruaryReads is a F/F book from a LGBT+ ownvoices author, and I just had to show off one of my faves 💛 • Don’t forget you can use my @illumicrate rep code BEC5 for 5% off 3 or 6 month subscriptions! • #bookstagram #instabook #igreads #vscobook #vscobooksnaps #bibliophile #bookblogger #illumicrate #girlsofpaperandfire
QOTD: if you could go back in time to any historical event, which would you choose? 🖤 • Today’s prompt for #FFFebruaryReads is a F/F contemporary or historical book! • Now I’m not saying I’d choose to go back in time and be involved in the French Revolution - although if I did, I’d obviously be on the side of the revolutionaries - but I do love all things set during it (I’m a huge Les Miserables fan so it all stems from there!) I can’t wait to get started on Dangerous Remedy by @katalicedunn - a YA fantasy set during the French Revolution! Huge thanks to @_zephyrbooks for sending me a proof 🇫🇷💀 • #bookstagram #instabook #igreads #vscoreads #vscobookstagram #yalit #bookbloggers #cosygram #bookishlife #whattoread #bookstamums #averybookishpost #booksaremagic #dangerousremedy
QOTD: who’s in your perfect fictional squad? 💫 • I’m so excited to start on Aurora Burning by @amiekaufmanauthor and @misterkristoff (aka the series with a team of misfits who are actual squad goals). For me, Aurora Rising was the perfect mix of sci-fi, action, and witty banter, and I can’t wait to carry on the series! 🔥 Thanks again to @rocktheboatnews for sending me an early proof copy! • #bookstagram #instabook #igreads #vscoreads #vscobookstagram #yalit #bookbloggers #cosygram #bookishlife #whattoread #bookstamums #averybookishpost #booksaremagic #aurorarising #auroraburning #squad312
QOTD: what’s your favourite quote from a book? 🌟 • Today’s prompt for @illumicrate’s January photo challenge is wear your beanie - so I could’ve shared a photo of me in the beanie, but it definitely suits Maisie more (even if it’s far too big for her to actually wear right now!) 💛 You can use my rep code BEC5 for 5% off 3 or 6 month subscriptions with @illumicrate!