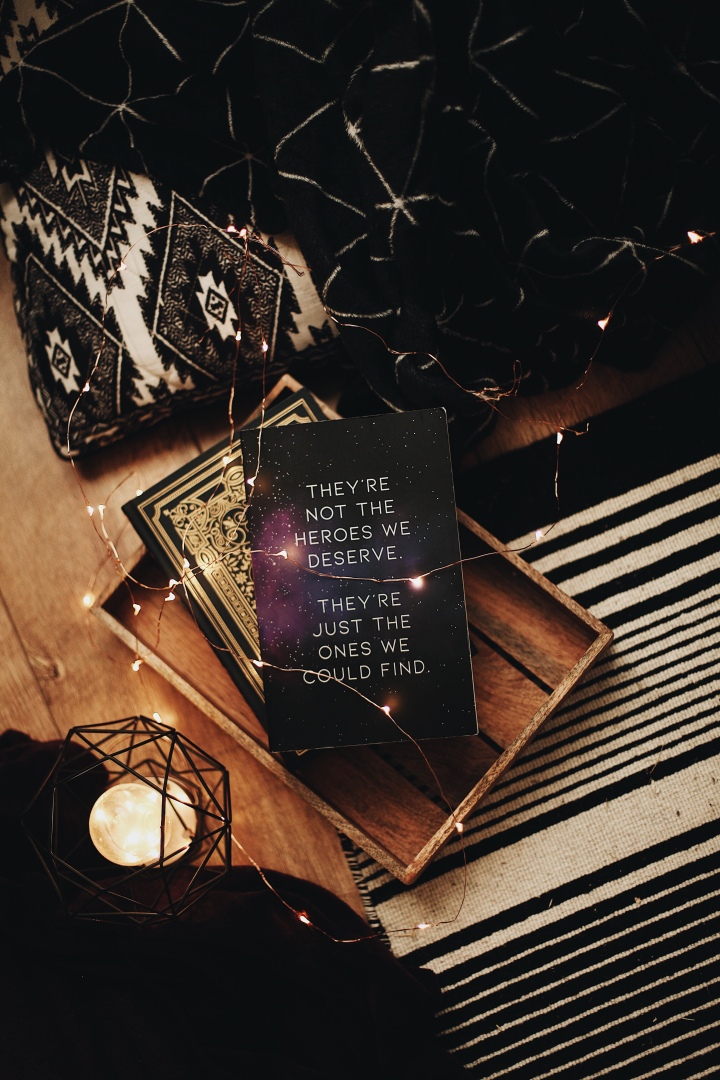 The year is 2380, and the graduating cadets of Aurora Academy are being assigned their first missions. Star pupil Tyler Jones is ready to recruit the squad of his dreams, but his own boneheaded heroism sees him stuck with the dregs nobody else in the Academy would touch…

A cocky diplomat with a black belt in sarcasm
A sociopath scientist with a fondness for shooting her bunkmates
A smart-ass techwiz with the galaxy’s biggest chip on his shoulder
An alien warrior with anger management issues
A tomboy pilot who’s totally not into him, in case you were wondering

And Ty’s squad isn’t even his biggest problem—that’d be Aurora Jie-Lin O’Malley, the girl he’s just rescued from interdimensional space. Trapped in cryo-sleep for two centuries, Auri is a girl out of time and out of her depth. But she could be the catalyst that starts a war millions of years in the making, and Tyler’s squad of losers, discipline-cases and misfits might just be the last hope for the entire galaxy.

They’re not the heroes we deserve. They’re just the ones we could find. Nobody panic.

Thanks to Rock the Boat for sending me an ARC to read and review!

After having never read Kaufman and Kristoff’s previous sci-fi series The Illuminae Files (I know guys, I’m sorry) and not being the biggest sci-fi reader, I was quite surprised to find myself so excited to read this book. However, I still ended up loving it more than I expected to! 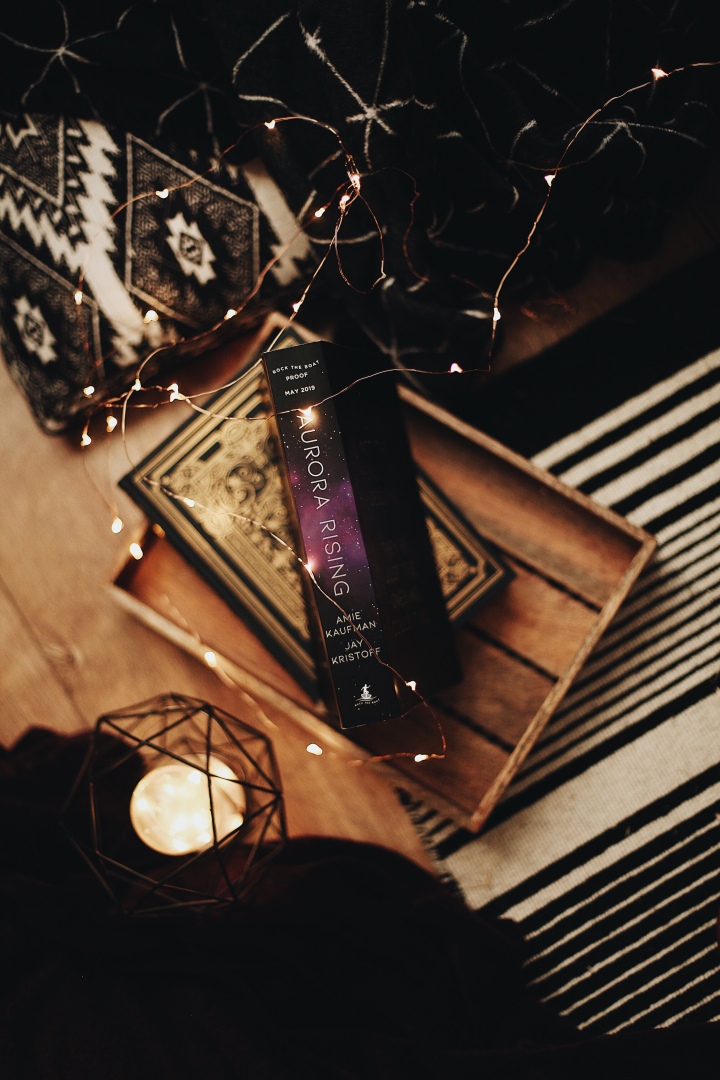 Aurora Rising jumps straight into the action, and although it continues to be fast paced throughout the book, the necessary character and plot development isn’t lacking because of this. The story follows Tyler, an Ace at Aurora academy, meaning he’s a perfect leader with perfect dimples to match, and his crew –
Cat – the Ace, or pilot. A badass tattooed tomboy who can fly a ship through anything and is madly in love with her best friend Tyler, something that everyone knows but nobody will admit.
Scarlett – Ty’s twin sister, the Face, or diplomat of the squad. Scar is super sassy, gorgeous, can flirt her way out of any situation. and definitely read as queer to me and to others who I’ve spoken to.
Finian – the squad’s Gearhead, Finian is in charge of all things tech. He has disabilities which meant, despite his skills, no other squad wanted him as he has to wear an exosuit. I absolutely loved Finian, his sarcasm and his queerness (it isn’t stated exactly what he identifies as but he does comment on how he finds both twins attractive and makes other comments implying gender doesn’t bother him). I’m completely shipping him and Scar, by the way.
Kal – the Tank, aka the one who you want on your side in a fight. Kal is Syldrathi, an alien species who humans are still on rocky terms with, and he’s basically a huge drama queen and speaks like he’s stepped straight out of Lord of the Rings (something which his squad mates often comment on).
Zila – the Brain. Zila barely gets any dialogue and is almost portrayed as the odd one out of the group. She’s super smart and has a range of quirky Luna Lovegood style earrings.
Auri – aka Aurora from well, the title. Auri has spent the past 200 years on a lost ship in cryo-sleep on her way to start a new colony on a distant planet, and now, Tyler’s found her and dragged her into the future. She may just be a girl out of time with some unknown powers, or she may be a catalyst for something much bigger…

I’ve seen this book compared to all things from The Breakfast Club to Guardians of the Galaxy to Six of Crows to Firefly, and I’d say it could definitely be comparable to any of them. It’s essentially a group of witty misfits in space, all just trying to do their best until they find themselves dragged into a war centuries in the making. There are a lot of sci-fi tropes included and even some references to popular sci-fi and fantasy series’, but despite this, I still couldn’t predict where the plot was going and was shocked by the ending. 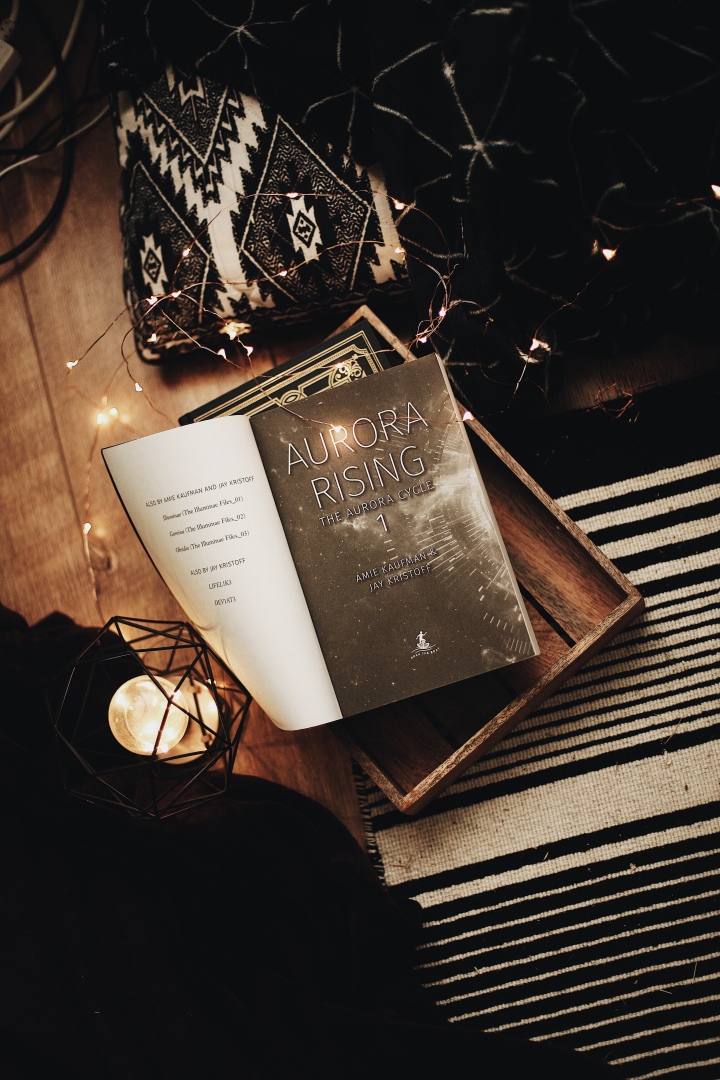 I feel like I’ve mostly been describing this book as something filled with banter and sexual tension, however, there’s definitely a lot of political intrigue thrown in too, all very relevant to today’s political climate despite it being set nearly 400 years in the future. I definitely connected to some characters more than others (as I say, for example, Zila just didn’t get enough page time for me to really see what she’s about, but I’m confident that I’ll see more of her in the sequel), however, I really was rooting for them all. Although the book takes place across various planets, space stations, ships etc, the world building was fantastic and it was so easy to picture each location. I’d love to see this book adapted into a film as I think it’d just be so dynamic!

Overall, Aurora Rising was a fast paced adventure full of twists and a range of emotions. I’m so excited to read the sequel!