“Perhaps I loved the monstrous because I was a monster. Josef, the Goblin King, and me. We were grotesques in the world above, too different, too odd, too talented, too much. We were all too much.”
– S. Jae Jones, Shadowsong

“I can only live, either altogether with you or not at all.”
– Ludwig Van Beethoven, The Immortal Beloved Letters

Six months after Liesl left the Underground and the Goblin King behind, she is determined to look to the future and attempting to further her and her brothers musical careers. However, the old laws cannot give up their Goblin Queen so easily, and Liesl cannot help but think of her love trapped by them. When a mysterious benefactor contacts Liesl persuading her to come to Vienna, she and her sister Kathë set off to find their brother Josef and attempt to start a new life away from the back woods of Bavaria and the old ways. By the time Liesl realises she has been running down the wrong path, it’s too late, and Josef and herself find themselves dragged down dangerous paths and back into the world they had both secretly longed for. Choices must be made, and sacrifices are owed, if they are to prevent the barriers between worlds from crumbling further, and if Liesl has any hope of saving both her love and her brother.

“Once there was a little girl, who played her music for a little boy in the wood. She was an innkeeper’s daughter and he was the Lord of Mischief, but neither were wholly what they seemed, for nothing is as simple as a fairy tale.”

Last year, I fell fast and hard for Wintersong. It was a book I’d anticipated for so long, after seeing it was inspired by the film Labyrinth but with a more adult twist, and I loved it just as much as I expected to. I waited eagerly for its sequel, Shadowsong, to be released, and I devoured it this weekend. I’ve seen mixed reviews for Shadowsong, but I have to say, I loved it even more than I loved its predecessor. Where Wintersong was lust and longing, Shadowsong is its dark, fractured counterpart.

S. Jae-Jones wrote a beautifully worded note at the beginning of the book, both addressing the trigger warnings within it (self-harm, addiction, reckless behavior, and suicidal ideation – do please bear these in mind if you plan on picking up a copy) and speaking of Liesl’s bipolar disorder (an aspect of the book which is own voices). You could really tell she’d poured her heart and soul into this book, as it was so personal in nature.

“Even if I did find his name and unlock his soul, there was the man I loved and the monster I craved. I did not know how to free one without losing the other.”

Although Wintersong was, in certain ways, a coming of age novel, Liesl is still journeying to find herself in Shadowsong. Having lived Underground in the goblin realm for a year, she is struggling to readjust and leave her experiences behind; she misses the Goblin king and she struggles to balance her love between him and Josef, the gardener of her heart, and the jealousy she has caused him to feel for loving another as much as she loved him. She is still trying to understand what it means for her to be Elisabeth; entire. After sacrificing her music in Wintersong, she is struggling to compose, but always feels closer to the Goblin King when she plays. Liesl certainly appears to be broken at the beginning of the book, and her development throughout the story is so strong.

A huge part of Shadowsong is focused on Liesl and Josef’s deteriorated relationship. In Wintersong, the two siblings were each others biggest supporters, but after experiencing hardship and homesickness whilst travelling Europe playing his music, Josef has come to resent Liesl for pushing him within his career and not coming to take him back to their home. He longs for the Goblin Grove and the myths that he feels so connected to. Liesl grows frustrated at him for not understanding that her love for the Goblin King does not override her love for him, and for the way he has changed in the years they have been apart. Josef’s depression is made clear throughout the book, but Liesl’s reckless moods seem to make her overlook the deeper reasons why her brother isn’t as she remembered. Both of the siblings go through some serious growth, both in terms of their relationship with each other and with their mental illnesses. As I say, Shadowsong deals with much darker topics than Wintersong did, but it deals with them in the most honest, realistic way. One of the characters who I’d grown to love in Wintersong and wanted to see more of was Josef, so I was so glad that so much of Shadowsong focused on him and his own personal struggles, despite seemingly having it all and having made a name for himself and his music.

“You always called me the gardener of your heart,” he said softly. “But you have gone and grown your flowers without me.”

As I said previously, Shadowsong is not a love story in the same way that Wintersong is – the heated longing is replaced with, loneliness, isolation and fear. Liesl wants to be able to move on with her life but can’t forget the man she fell in love with underground or his suffering. Although the Goblin King is always present in Liesl’s mind, he isn’t physically in Shadowsong very often, which I thought was to be expected after the ending of Wintersong. However, his essence is still there, and when he does make an appearance you get to see a different side of him – not only the suffering he is experiencing since Liesl left the underground, but also a bit more of his past and how he ended up ruling the Underground. Some mysteries from Wintersong are also uncovered a bit more, such as the rules of the Underground and the former Goblin Kings and their wives.

“I am not a saint; I am a sinner. I wish you were dead so I could live. If you were dead, I could bury you—in my heart and in my mind. I could mourn you, then let you go.”

As with Wintersong, the writing in Shadowsong was absolutely exquisite. The lush descriptions continued (and they’ve made me so excited for our trip to Vienna in April) and although the musical language was toned down from Wintersong, it still remained and made Shadowsong very reminiscent of its predecessor.

Although the two books were completely different in most ways, so many comparisons can still be made between them. Where Wintersong tackles Liesl’s own issues with her confidence and self worth, Shadowsong unflinchingly looks at her mental illnesses. When Wintersong ends on a seemingly positive note for Liesl’s previous issues, Shadowsong presents Liesl still struggling with her inner battles. Shadowsong gives us a girl we saw as a triumphant hero showing that she still suffers; showing that those who we perceive as strong can still struggle. 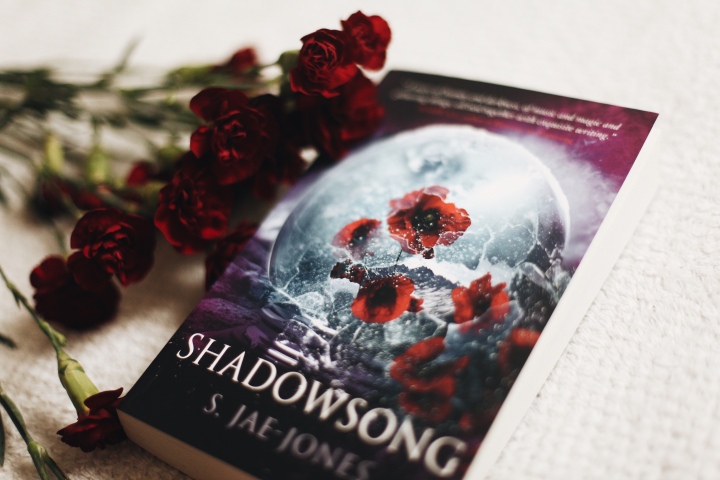 “He was no longer first in my heart. Josef and the Goblin King shared the space where my soul lay within my breast, along with Käthe and François and Constanze and Mother. My capacity for love had not diminished; indeed, it had only grown with each person I let in, but the formless, undifferentiated love I had felt in childhood only grew more defined with age and time. There were parts of myself I was willing to share with my sister, parts that were given to my brother, and still other parts that had been claimed by an austere young man.”